Left: Richard Warrens Military headstone that was in Bachelors Grove Cemetery but has been missing for  a very long time. These photos were taken in 1951 by a family member visiting the cemetery and were found while researching by The Path to Bachelors Grove in 2014.

Right and Below: Photos of Richard Martin Warren during the Civil War from a family collection.

Richard Warren was born to parents Ezra and Susan warren in Vermont, October 29, 1844. His family moved by covered wagon to Bremen in 1848.

In January of 1864 Richard enlisted with the Union Army. An Illinois State Archives detail report lists him as being 20 years old, standing 5’ 8 with dark hair, blue eyes and a light complexion.

Richard was captured at the Battle of Ware Bottom Church, Viriginia on June 2, 1864 and taken to the Confederate POW camp in Andersonville, better known as Ft. Sumter. We are not sure how long he was a prisoner there but know he was mustered out (discharged) December 6, 1865 in Norflok, VA. Richard did marry and have a child after the war, but a remark in one of the family records said that he was never the same after.

In June, 1867 he married Charlotte Hatch. They had a child in 1868, a daughter named Charlotte after her mother.

Above: Photo of the original family headstone for Richard Martin Warren in Bachelors Grove Cemetery, taken in 1951 by a family member. The stone has been missing for many years and this is the first photo seen of this group of stones found by The Path to Bachelors Grove via Ancestry.com in 2014

The above photo was taken in 1951 in Bachelors Grove Cemetery by a member of the Warren family. The stone pictured here is belonged to Susan Warren and has been missing from the cemetery for some time.  We found this photo, along with two others in 2014  and were very excited as photos of these stones have not been seen before. It also gives a glimpse of other stones in the cemetery in the upper right corner. The Rippet stone is standing and on the very edge of the right of the photo is the Patrick family stone standing as well. To date we believe this group of photos may be the oldest photos that have surfaced from the cemetery.

Above: The only remaining stone left on the Warren lot belongs to Mark Warren and his wife Amazetta. 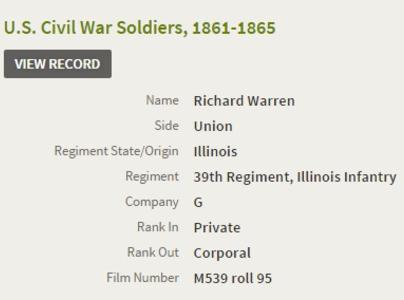 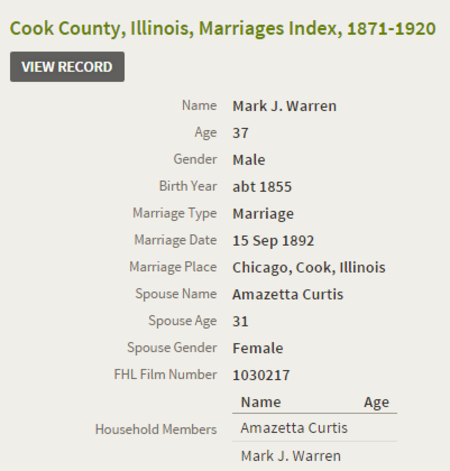 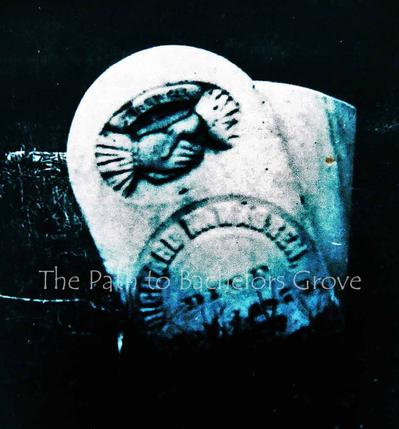 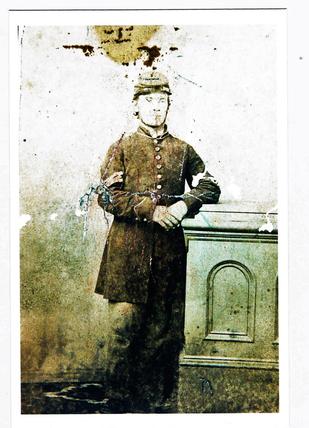 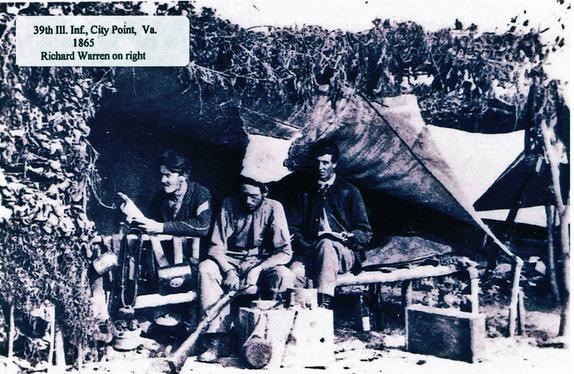 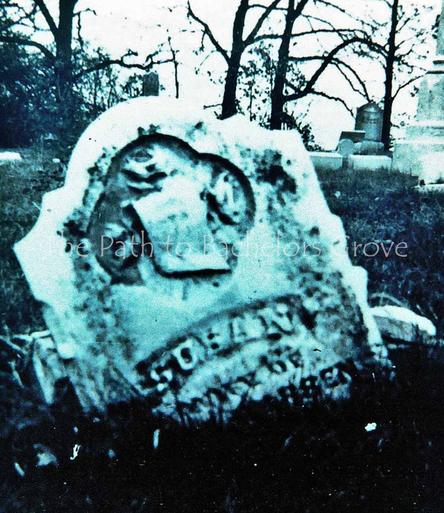 Family information taken from ancestry.com says that Ezra Snow Warren was born to Hugh Warren and his wife in 1813. Census reports between 1850 and 1880 lean towards his birth year being 1804-07.

Ezra Married Susan Lamsen and the couple was given wedding presents from both fathers. Ezra's father giving them a wagon and team of oxen and Susan's father 500 dollars in gold. Ezra's father suggested they go west where "one can see the next farm". It implies they left soon after marriage. However, the 1840 Federal Census shows Ezra and his wife living in Stowe, Vermont with a duaghter between the age of 5 and 9 years old. If the daughter was older than six years old, either she would not be the daughter of thier marrige or the date of marriage would be wrong. Thus they left Stowe only after 1840. 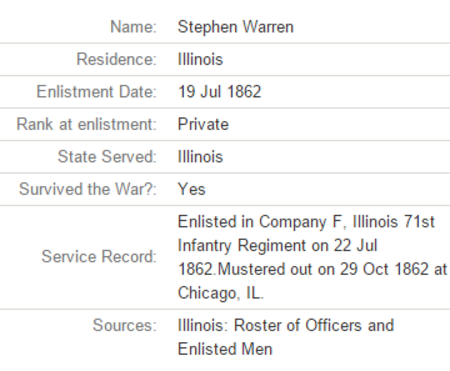 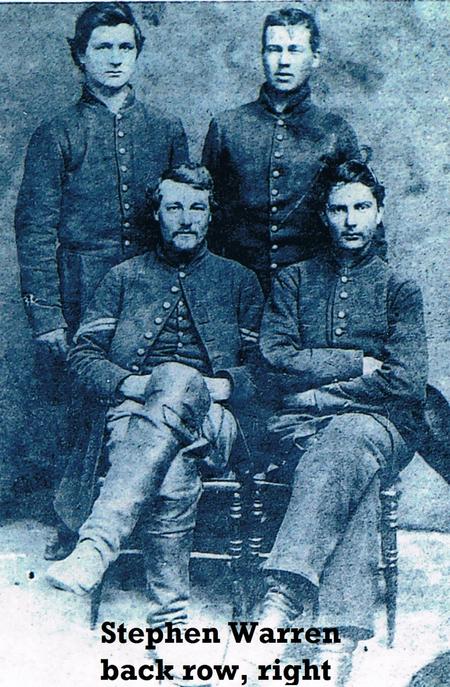 Susan Lamson was raised in lower East Canada and of French decent, family stories say she is  a cousin of U.S. President Martin Van Buren .
Vermont Census in 1840 shows Ezra Warren living in Stowe, married with a daughter between the ages of 5 and 9 years old.
An 1850 Census shows Ezra Warren married to a Mary (or S May) Warren, living in Cook County, Illinois. It indicates "Mary" was 45, born about 1805, in New York.  The 1870 Federal census states Ezra's wife was Susan, born about 1812 ( age 58) and born in Canada. The 1880 Federal Census shows Ezra's wife as Susan, born about 1812 (age 68) born in Canada and both parents born in Canada.
Thus the tradition would imply that an aunt or uncle of Martin Van Buren was French Canadian, who married an aunt or uncle who was of Dutch descent and born in French Canada and this aunt and uncle were the parents of Susan Lamson. The border between Canada and the United States was not firmly established until the Treaty of Paris in 1783. Thus the parents of Susan Lamson could have been living in what would become US territory but consider themselves Canadian, but more likely were living in what would become Canadian Territory and consider themselves American. 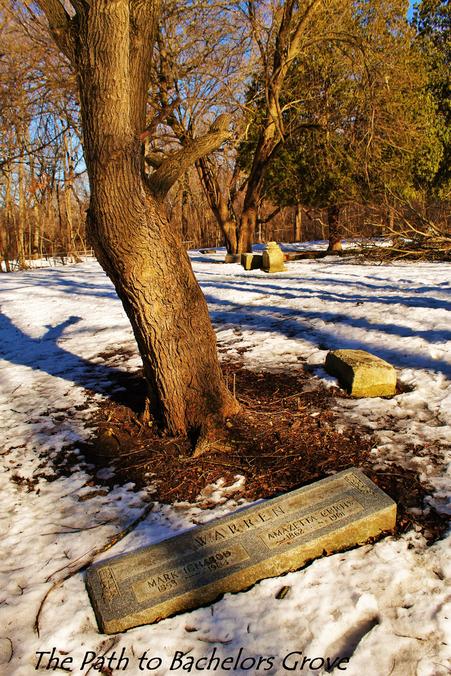