Daughter of Hamilton and Mary Fulton above

Below: Excerpt from the 1935 News Article Pioneers in Peaceful Rest, where a reporter walked Bachelors Grove Cemetery with Joseph Fulton and recorded some of the historical burials at the time. 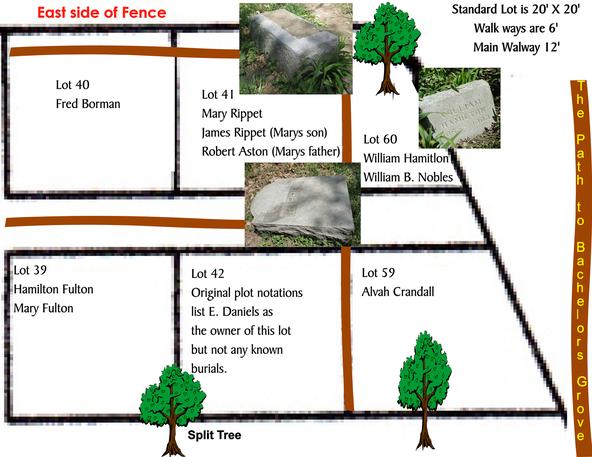 Buried in Lot #39 are more of the Fulton Family. Hamilton Fulton is the half- brother of John Fulton Sr. and Uncle to John Fulton Jr. who is the head of the Fulton family buried beneath the  prominent, large Gray  headstone that has become an iconic image associated with Bachelors Grove cemetery.

Buried with  Hamilton are his wife, Margaret, his daughter Margaret , and his son-in-law John Law. 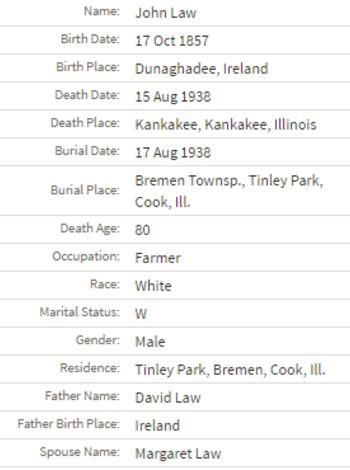 Below: Excerpt from Ferdinand Schappers 1917 Manuscript.

Below: llinois Death Index for

John Law, aged 81 years, former resident of Bremen Township, and very well know in the Tinley Park territory, died Monday morning at the home of his daughter Margaret in Kankakee, where he had been making his home since leaving the farm near Tinley Park. Mr. Law was born in Ireland and used to tell many interesting stories of the mountain of his native country and came to America at the age of 15 years. He located on a farm near Oak Forest many years ago and continued farming until the infirmities of old age obliged him to retire. He is survived by one son , David Law of Joliet, and one daughter Margaret Law of Kankakee. Funeral services were held from the Funk & Adler chapel in Oak Forest; Saturday afternoon with burial in the Smith Cemetery near Tinley Park. A goodly number of Tinley Park people attended the funeral. 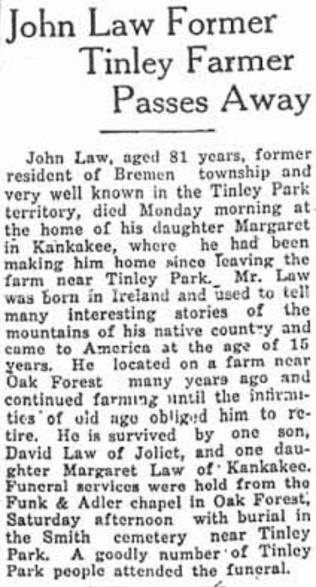 Above: Section Plot map of the SouthWest corner of Bachelors' Grove Cemetery showing the location of lot #39 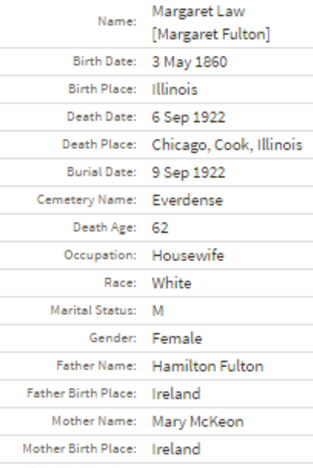