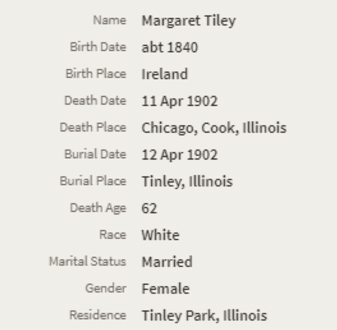 Tinley Park, July 30- George Tiley, formerly a resident of Tinley Park and vicinity died at his home in Warren, Minnesota last week and was brought here for burial Sunday, The services were held at the Bachelors Grove Lutheran Church. Interment was in the cemetery adjoining the church. The deceased was buried beside his wife and son who passed away a number of years ago.

A 1870 Bremen Census shows a 33 year old George Tiley Sr and his wife 30 year old Mageret living on Stephen Rexfords farm with George working as a Farmhand and Margaret a domestic servant.

According to Brad Bettenhausen's BG research, George Tiley Sr.'s  obituary appeared in the Joliet  News on Thursday July 31, 1913  stating that  "services  were held at the Bachelors Grove Lutheran Church and burial was  in the cemetery adjoining the church which would point to Trinity Lutheran church that was also known as Bachelors Grove for a time. But the obituary also says that George Sr. was laid to rest beside his wife and son who passed many years before, and both are buried in Bachelors Grove Cemetery.  The information was probably incorrect as tended to happen a lot with Bachelors Grove documentation.