William Rick was born  in 1871. He married his first wife Mary Cague in 1895. Mary died a few days after their first son William Cague Rick was born in 1899. The 1900 Census shows William Sr.  as widowed, living in Bremen, IL as a farmer with the only other member of the household being an 11 month old William Jr.

In 1909 William Sr. remarries. His second wife eleven years his junior. The 1910 census shows William Sr. and Theresa as the only household members.

William Jr. shows up again in the 1920 census as a 20 year old young man  living in Bremen with a 72 year old woman. In the section where is asks what the relation to the head of household is and William jr is listed as "companion". He is working as a lumber handler in a Car Shop.

William Jr marries Marie Bruening in 1922 Their first son Logan  is born in 1923. In  November 1925 history repeats itself and William Jr's wife dies the same way his mother did, a few days after their second child Virginia was born.

Sometime also that year William Sr and his wife Theresa have a baby girl Ruth Ann.

In January of 1926 William Sr dies and is buried with his first wife Mary in Bachelors Grove Cemetery.

William Rick and his first wife Mary are buried in lot #73 in Bachelors Grove Cemetery.

Mary died of an infection after childbirth in 1899. Pictured right is William with his second wife Theresa (foreground), brother John, and Johns Wife Mary Ellen (background). The photo, located at Tinley Park Historical Society by Charles Williams, was taken about 1910.

John and his wife Mary Ellen are buried in Lot # 77 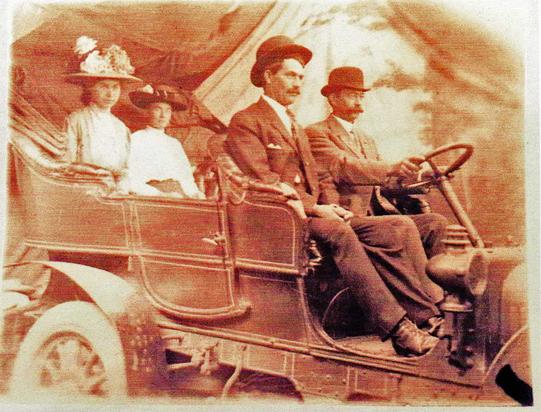 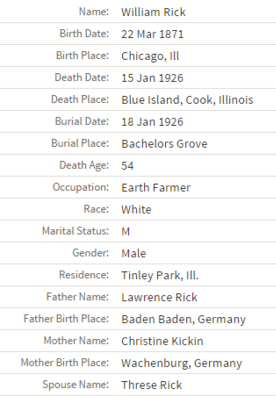