of Diptheria at 19 months old

Daughter of Richard and Maria

First of three Wives of Thomas 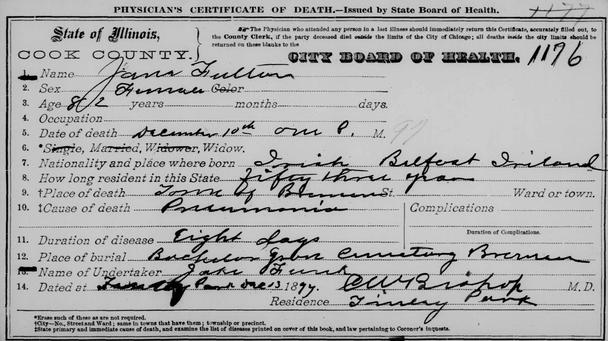 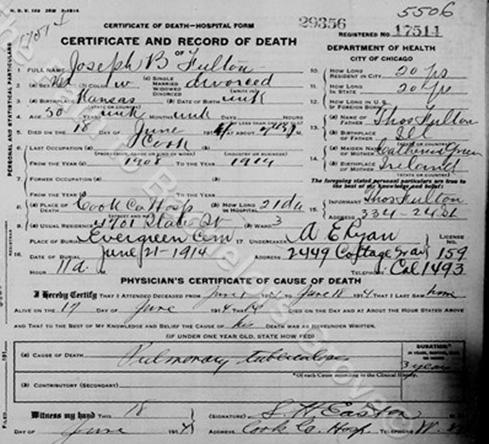 Mother of Louis and Charles {lot #}

The members of the Cool family listed here were reinterred  September 9, 1887

Daughter of Walter and Hannah 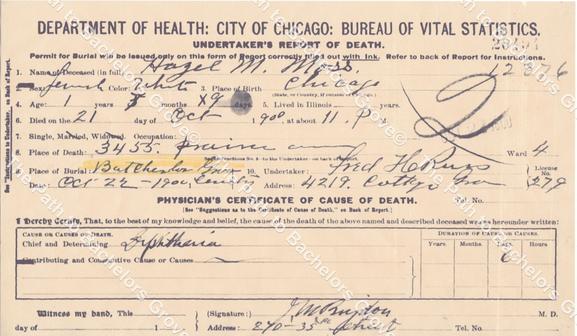 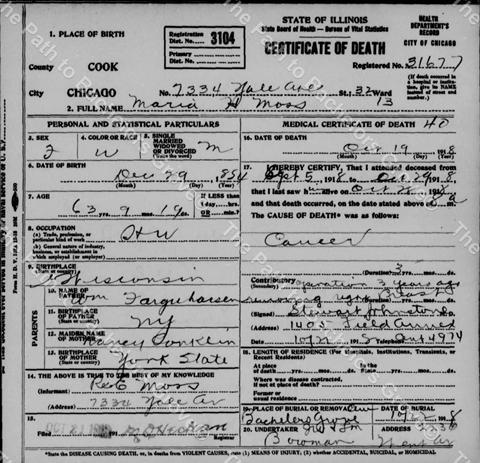 Robert Fulton Fulton died when he was only 31 years old after committing suicide by jumping in front of   a Rock Island train. Robert is one of four people in Bachelors Grove that died as the result of a train involved accident.

Father of John Sr and Hamilton 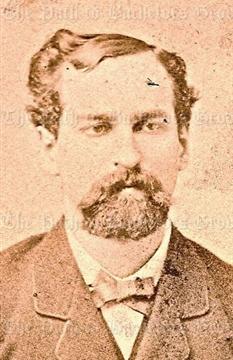 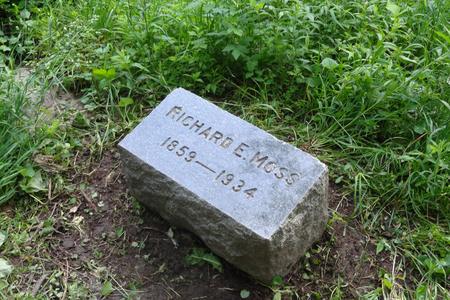 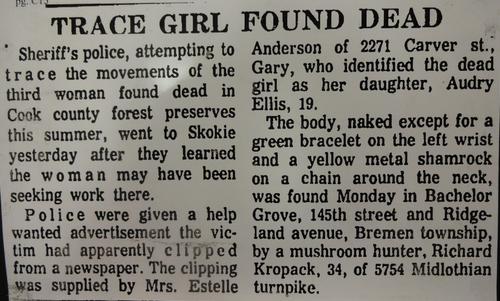 View the above slide show to see the top obelisk that belongs on top of the Moss marker. The'top"stone was donated to the Tinley Park Historical Society years after members of the Moss family took the obelisk stone to preserve it.

Emanuel Schroeder, 78 years old, veteran pioneer of this community who died March 12, at his home here was born in the province of Saxony in Germany, January 24, 1850. He was only two yers old when the family came to Cook County, Illinois. They came up the Mississippi river on a boat. The home was established in Worth township 3 1/2 miles west of Blue Island on July 17, 1875. Emanuel was married to Ellen Noble daughter of a pioneer family of Bremen Township. this couple has lived near or in Blue island continuously since that time. The career of the family is well known to all of the old settlers and to thousands who hae come to this vicinity more recently.

Burial was at the Bachelor Grove cemetery. he is survived by his widow, Ellen; two sons william and Walter; one brother Leopold and scores of other relatives. 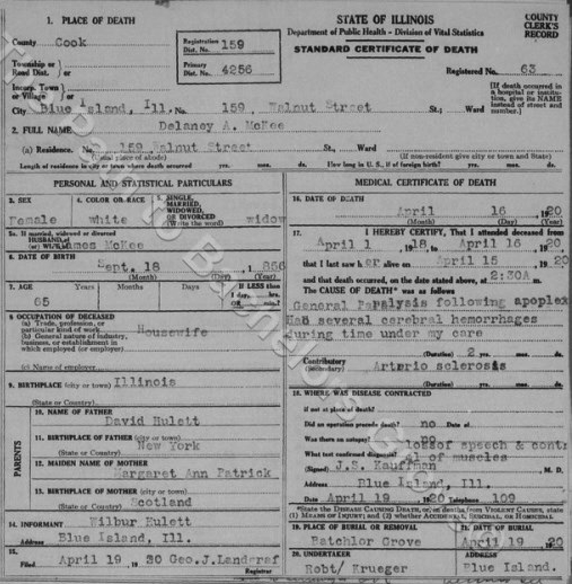 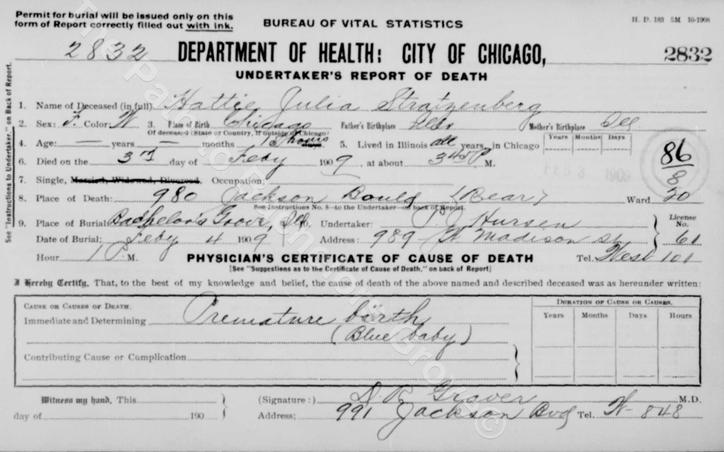 North half of the lot:

Anna and Mary are the twin daughters of Emanuel Schroeder and his wife Ellen Nobles. The information that the twins were buried in Bachelors Grove came from family records in the possession of a family member.

South half of the lot:

Tinley Park, July 30- George Tiley, formerly a resident of Tinley Park, and vicinity died at his home in Warren , Minnesota, last week and was brought here for burial Sunday. The services were held at the Bachelors Grove Lutheran Church. Interment was in the cemetery adjoining the churc. The deceased was  buried beside his wife and son who passed away a number of years ago.

**NOTE** references to Tileys being  buried in BG was mentioned in the 19** article Pioneers in Peaceful Rest. And the family did own a lot in BG. There aren't any listings of the Tileys being buried at Trinity Lutheran and it is thought the reference to Mr. Tiley being buried in the adjoining cemetery to Bachelors Grove Lutheran Church is a mix up of details.

Daniel Newman, formerly residing at 135th and Crawford Ave., died Friday morning. He was born in

Bremen Township, April 19, 1871, the son of the late John and Rosanna {nee Turney}, and had resided in this community his lifetime.

Remains was at rest in the home of his niece Mrs. Lillie Willis, 2322 W. 122nd St., from Saturday evening until the hour of the funeral which was held at 2 o'clock Monday afternoon, December 15, with the Rev. Emil helm officiating.

Interment was in the family lot in Bachelors
Grove cemetery.

Mr. Newman was the husband of Dora, brother of John Newman of Witchita, Kansas, and Mrs. Dolly Hewson of Snohomish, Wash.

Mrs. Delaney Ann Hulett, 66 years old, dided April 16 at her home in
Bremen township. Burial sevices were conducted April 19 under the direction of the Rev. T.R. Egerton, pastor of the First Congregational church. Burial was at Bachelors Grove cemetery.

Mrs. Hulett was born in Bremen township September 18, 1854. S
she lived in Blue Island 31 years and was for 25 years a teacher in the Cook County schools.

She was married in 1900 to Dr. J. W. McKee, of Des Moines, IA. He came at once to Blue Island and the couple lived here until his death in 1911. Before her marriage Mrs. McKee was a member of the Universalist Church but she later affiliated with the Congregational church.

Louis Hageman, 81 years old, and one of the oldest settlers in Blue Island vicinity died at his home, 149th and Crawford, Midlothian, Thursday after a long illness. He was born in Germany, January 25, 1848, and came to the United States with his parents when he was nine years old, settling near Blue Island. In 1872 he married Alberta Hulett and three children are surviving him: Mrs. William Schwartz of Chicago and Mrs. Olive anderson and Ward Hageman of Midlothian. The funeral was held at the home Monday with the Rev. B.F. Freese officiating and interment made in the Bachelors Grove cemetery.

Most visitors to the Grove know of the "Madonna" stone on which the famous photo was taken.Many make it a point when visiting to take their  own 'Madonna" pose photo.

Has anyone ever considered whose stone they are sitting on?

From measurements we took in December 2013 we believe that the checkered stone may belong to lot #73.

​As you enter the cemetery, to the immediate left is the Hageman stone lot #74.Moving West long the fence line are lots #73 and then #72.

#72 is the Foskett family lot on which the Foskett stone is still standing. The West fence line is longer than the East fence line making the South fence line on a angle. Lots are said to be 20 x 20 feet according to other cemetery plot documentation. Some lots may be smaller ,different sized to be appropriately sized to fit cemetery borders. The Foskett stone is in the North West corner of its lot.The checkered stone sits in the same corner of its lot, North West corner.It is possible it could have been moved but there is no visible concrete foundation to be seen in the lot or surrounding area.So it seems very possible that it is in its original position.The FAMOUS checkered stone which is the center of many a photo taken at the Grove may belong to either Mary or William Rick who is listed as owner of lot #73.

England, and came to this country 30 years ago with his wife and family.

Funeral services were held at the Adler Funeral home in Oak Forest last Saturday, at 2 o'clock with the Rev. Hopkin officiating, members of Blue Island I.O.O.F. lodge participated in the rites. Burial in Bachelor Grove cemetery. 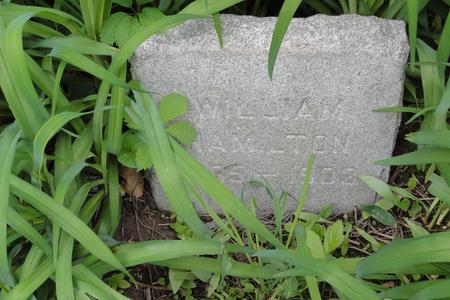 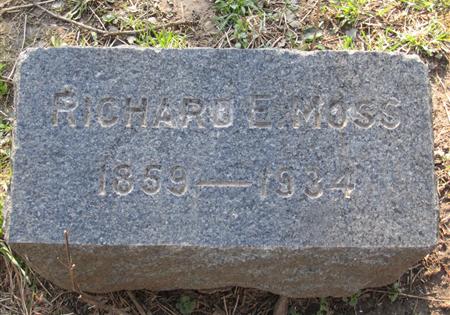 A photocopy of  the cemetery plat at Cook County contains the name Mrs. John Rick

She was born in Bremen Twp. July 25, 1870 the daughter of the late Frank and Dora {nee Moore} Flassig, and had resided in the community her lifetime until about 3 years ago when she came to Blue Island to make her home.

Remains at rest at the residence from Saturday morning, October 9, until the hour of the funeral which was held on Monday afternoon, October 11 at 1 o'clock with Rev. Emil Helm of Cleveland fromerly of Blue Island officiating, assisted by Mrs. Emil Helm as soloist. Interment was in the family lot in
Bachelors Grove cemetery. 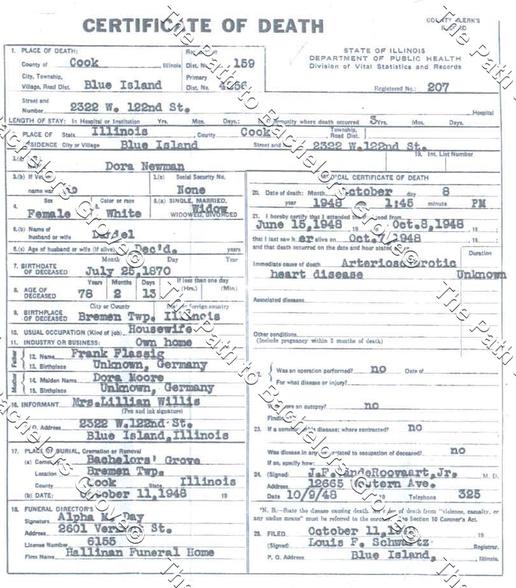 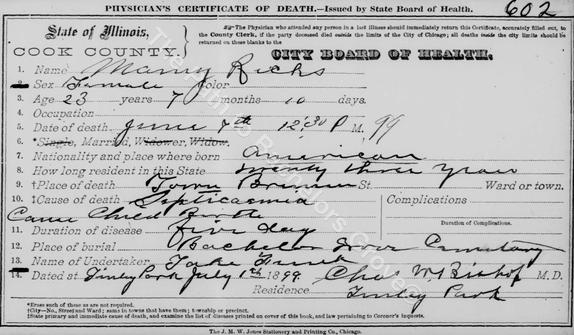 Charles Hageman an old settler of Blue Island, died at the age of 83 years 8 months, at his home on Western Ave. , March 15th, after a short illness of pneumonia. Mr. Hageman was born in Germany, July 4, 1840, and came to this country at the age of 17 years, making his home in Blue Island, where he has been a resident for 66 years.

He is mourned by wife, daughter and one brother and many friends. Funeral services march 18, Rev. Doermann officiating. Burial at Bachelor Grove Cemetery.

Theodore Post, 63 years of age, died on November 8th, of heart trouble. He resided at 597 Elm street, for several years. he was born in Germany and was married to Sophia Flassig in 1888. Four children were born to his union, Mrs. John C. Krech of Grant Park, Mrs.
Geo. Mager of Mokena, Mrs. August Vohs and Mrs. Edward Wierman of Blue Island. Funeral services were held on November 11th, at 1:30 frin tge f=resudebce abd at 2 o'clock from St. Paul's Church, conducted by the Odd Fellows and Rev. B.J. Freese. Interment was in Batchelor's Grove cemetery, north of Midlothian.

james Fullerton, 88 years old and a retired farmer for more than 17 years in Blue Island died last Thursday of old age. He had been residein at 2448 Burr Oak Ave., as his wife had passed away many years ago. Funeral services were from Halliman's Saturday, and burial at Bachelors Grove.

Richard Kropack is the man identified as the person who

"discovered" a body of a young girl in Bachelors Grove while mushroom hunting. Richard is NOT buried at B.G.   We are currently in search of the burial records for Richard and an answer as to why his name is said to be written in blue ink on the original plot notations for lot #67 . Richard was one of the three men of the "Bachelors Grove Group" that in 1967 attempted along with Clarence and Howard Fulton in a official town hall meeting to have Bachelors Grove cemetery established as a Breman Township shrine and to be owned and maintained by the Township.            Go to the Local History page to see the full story - document.