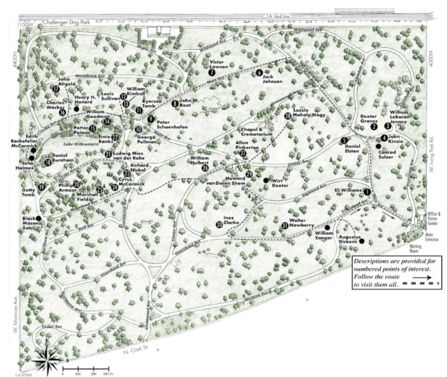 Click the Map below for a downloadable pdf of Graceland Cemetery with a list of notable grave sites within. 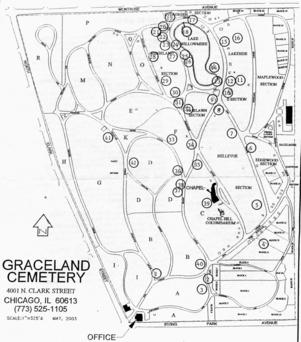 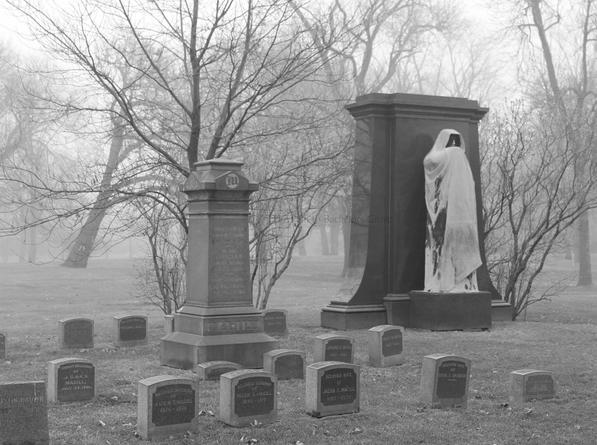 Right:
A stunningly beautiful marble statue of a young girl encased in glass is one of Chicago’s most visited grave sites and host to one of the cities most popular ghost stories.
A life sized statue carved in her image sits atop the grave site of Inez Clarke who died at only 6 years old. As with many urban legends there are variations to the story but most involve Inez being struck and killed by lightning.
It is said that on tumultuous stormy nights, when lightning is especially terrifying, the statue disappears from its glass encasing to roam the cemetery, returning to her rightful place sometime before morning.
Several cemetery guards are said to have witnessed this phenomena.
​ 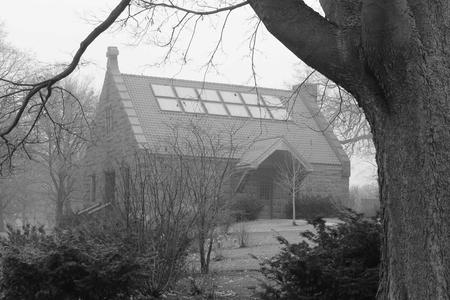 For more information on Graceland Cemetery:

​In the 19th century, a train to the north suburbs occupied the eastern edge of the cemetery where the "L" now rides. The line was also used to carry mourners to funerals, in specially rented funeral cars, requiring an entry on the east wall, now closed. At that point, the cemetery would have been well outside the city limits of Chicago. After the Great Chicago Fire in 1871, Lincoln Park which had been the city's cemetery, was deconsecrated and some of the bodies moved here. The edge of the pond around Daniel Burnham's burial island was once lined with broken headstones and coping transported from Lincoln Park. Lincoln Park then became a recreational area, with a single mausoleum remaining, the "Couch tomb", containing the remains of Ira Couch. The Couch Tomb is probably the oldest extant structure in the City, everything else having been destroyed by the Great Chicago Fire.
The cemetery is typical of those that reflect Queen Victoria's reconception of the early 19th century "graveyard". Instead of poorly maintained headstones, and bodies buried on top of each other, on an ungenerous parcel of land; the cemetery became a pastoral landscaped park dotted with memorial markers, with room left over for picnics, a common usage of cemeteries. The landscape architecture for Graceland was designed by Ossian Cole Simonds.
The cemetery's walls are topped off with wrought iron spear point fencing. 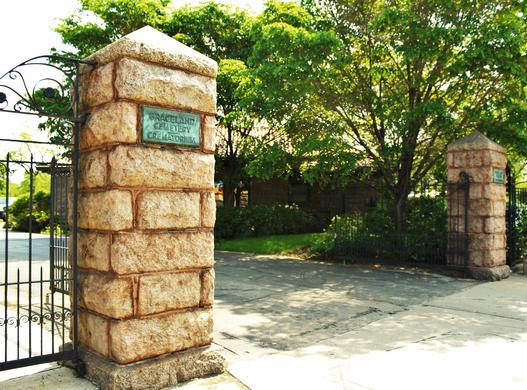 The link here will take you directly to the interactive map below on the Graceland Cemetery page. You can click on the numbers and it will give you a photo of the headstone and a history of those buried in the plot- ​